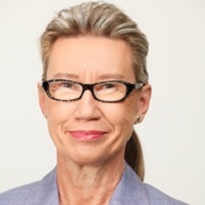 Marja Makarow is since July 2016 director of Biocenter Finland, and former vice-president of the Academy of Finland – the Finnish research Council (2012-2016) and chief executive of the European Science Foundation (2008-2012). She is former vice-rector for research (2003-2007) and professor of applied biochemistry and molecular biology at the University of Helsinki. Marja Makarow has served as president of the European Molecular Biology Conference (EMBC/EMBO) and delegate of Finland in the council of the European Molecular Biology Laboratory (EMBL). She was charged with the establishment of the Aalto University as vice-chair of the board in 2008-2012 and the new Tampere University as chair of the board in 2017-2018. She served as chair of the ERC Starting grants panel on genomics, genetics, systems biology and bioinformatics until 2013. She is governing board member of the European Institute of Innovation and Technology (EIT), and chairs the board of Technology Academy Finland that awards one of the world’s most significant innovation prizes, the Millennium Technology Prize. She also chairs the evaluation panel of the Innovation Prize for Women established by the Finnish Parliament. She serves on strategic councils of several European top universities and has steered research assessments of a number of them. In most of her functions she has been promoting women in academia and innovation at governance, policy and implementation levels. She is a Unesco Women Speaker, and Chevalier dans l’ordre de la Légion d’honneur of France.