Highlights of the 1st ACT International Synergy Conference in Brussels 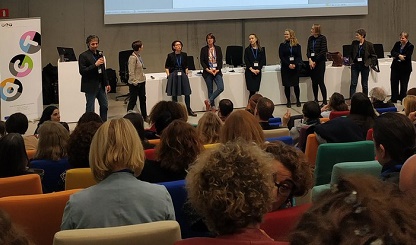 The 1st ACT International Synergy Conference was held on the 25th of February 2019 in Brussels and gathered 100 participants from 23 different countries, who came together for a day of presentations, networking and workshops. Conference participants comprised a variety of profiles, from gender experts and researchers to research policy directors, diversity and inclusion officers, gender equality consultants and practitioners, and partners of other EU-funded projects on gender equality in science.

Signe Ratso, Deputy Director-General of the DG Research & Innovation (RTD) at the European Commission, offered the opening speech, followed by a welcome presentation by Jörg Müller (Universitat Oberta de Catalunya), the ACT project coordinator. María José Romano, ACT project manager, gave the audience a summary of the main features of the ACT project and Rachel Palmén, senior researcher at the Universitat Oberta de Catalunya and Notus, introduced the ACT’s conceptual framework and the benefits and challenges of using Communities of Practice for advancing gender equality in the European Research Area. Other presentations about the ACT project referred to the first insights from the Community Mapping survey, by Sybille Reidl (Researcher at Joanneum Research).

Diverse experiences of Communities of Practice in R&I and HE institutions and practical tips for CoP builders were included in a series of presentations by Anne-Charlott Callerstig, researcher at Orebro University in Sweden, who explained the building and demise of “European Community of Practice on Gender Mainstreaming”; Anastasia Zabaniotou, Professor at Aristotle University of Thessaloniki in Greece and coordinator of TARGET project, who presented the experience of the Mediterranean Network of Engineering Schools (RMEI); and Karolina Kublickiene, Associated Professor at Karolinska Institutet (KI) in Sweden, who talked about the integration of the sex and gender perspective in clinical research and PhD training through the doctoral programme initiative “Gendered Innovation Alliance”, at Karolinska Institutet.

The day ended with a concluding session chaired by Elizabeth Pollitzer (Co-founder & Director of Portia) on the next steps to advance opportunities and impact of collective action, with contributions by representatives of the ACT Advisory Board Hans M Borchgrevink (Consultant for the EC revision of SHE Figures and member of the EU Gender Summit Steering Group), Dagmar Simon (Director of EVACONSULT GbR) and Lidia Borrell-Damián (Director of Research and Innovation at the European University Association, EUA).